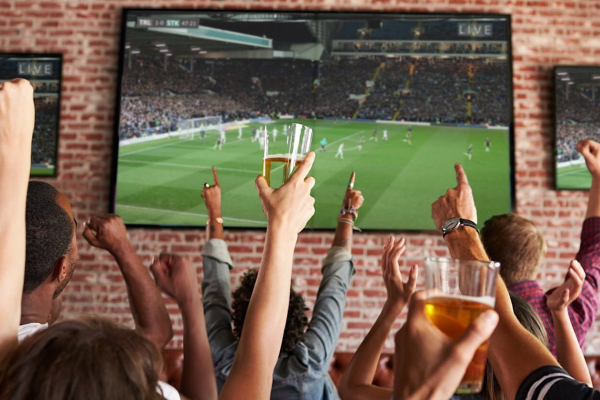 While nothing totally replaces the excitement of actually attending a game and experiencing the joy of victory firsthand, you can make a pretty compelling case for watching your favorite team  at home. Thanks to new technology, there have never been better options for fans to stay in and enjoy the big game.

Sports consumption is changing in the United States (and has been for several years now). Viewers are less likely than ever to sit down and watch a full game – basketball, baseball, football, or otherwise.

In a study of 18-34-year-old NFL, NBA, and MLB fans, a large percentage of fans say they prefer watching highlights to full games. This includes 48 percent of NFL fans within this demographic (compared to just 20 percent of 35-to-49-year-old fans and 11 percent of 50-plus fans).

While some fans prefer to watch a game in real time, there are many others who would rather wait until the end of the game to tune in.

As you might suspect, these changing trends in viewership and engagement coincide with a lowered interest in attending live sporting events in person. A striking new report from YouGov shows that 59 percent of Americans now prefer to watch games on TV than be there live. Millennials are the least likely to feel this way (just 46 percent prefer to watch from home), while those over the age of 35 are far more likely (65 percent) to choose the living room over the arena.

Based on these statistics, it’s tempting to assume that people are less interested in the product (sports). However, this isn’t necessarily true. Sports are more appealing to Americans than ever before. It’s not a product problem – it’s a delivery problem. Watching a game from home affords fans a long list of benefits, perks, and comforts that simply can’t be replicated in the stadium.

4 Ways to Bring Fan Excitement to Your Living Room

If you’re part of the movement of fans who are more interested in watching games from home than attending in person, know that you’re not alone. Here are several ways you can bring even more fan excitement into your living room:

Make sure you’re watching the big game with the right technology. For example, you might have a 4K television, but is your streaming service actually streaming the live sports content in 4K quality? Surprisingly, the answer is often no. However, if you pay a few bucks extra per month, you can usually access this upgraded quality (which is well worth it). For example, the popular YouTube TV platform has an add-on called “4K Plus” which offers 4K viewing on select content for channels like ESPN, FOX Sports, NBC Sports, etc.

Another added benefit of watching sports from home: Your refrigerator is only a few feet away. So instead of spending $18 on a beer and a hot dog, you can enjoy a delicious (and much more filling) menu for pennies on the dollar. Try some of these tailgate food ideas.

When you’re at the game, you can see stuff that people at home can’t see. Whether it’s a scuffle between players on the bench or a pre-game flyover, you get all of the extras. However, you also miss some of what’s happening on the field (unless you’re courtside, of course).

At home, you might not have the in-stadium experience, but you benefit from extra in-game commentary from announcers. You can also follow different Twitter accounts of journalists and commentators to get up-to-the-minute stats and insider reports.

Don’t have a rooting interest in a game, but want to feel a little surge of adrenaline each time a point is scored? Use one of the many traditional sports betting apps that are now available in many states.  Want a differentiated betting experience?  Try Sporttrade, which is the first dynamic sports betting and trading exchange on the market. If available in your State, you can  download the Sporttrade iOS an app and immediately start buying and trading teams during the middle of a game based on value (much like the way a stock market works). You’ll find yourself glued to the TV.

Adding it All Up

Whether you’re making an intentional decision to watch more games from home to save money, or you simply have a stronger desire to watch from your sofa than get out and fight crowds and traffic, a home viewing experience has plenty to offer.

Hopefully, these tips and ideas take your experience up another notch!

Two black bears were videoed wrestling on a backyard trampoline

What's the deal with Adam Schefter?

The highest-paid athletes are among the world’s wealthiest people, along with those that are good at sports betting!...

The highest-paid athletes are among the world’s wealthiest people, along with those that are good at sports betting!...