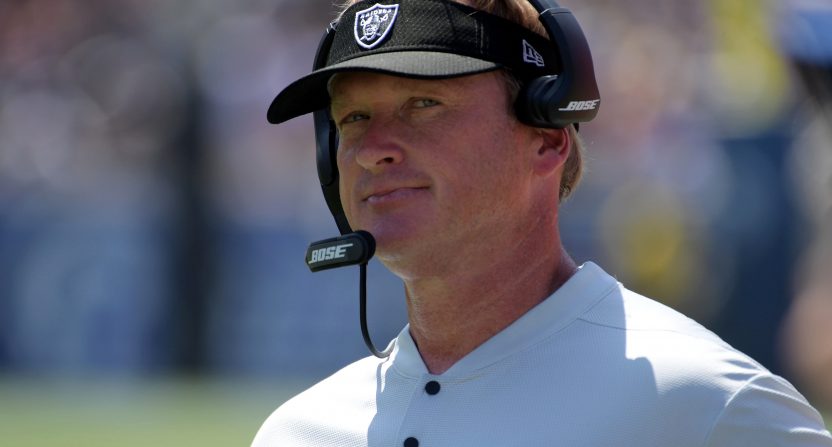 Historically being a fan of the Raiders, before when they were in Oakland and now that they’re in Las Vegas, has always been a feat of compromise, belief, hardship, and resilience. Any football fans who like to bet on NFL action usually know how volatile picking the Raiders can be like, but this 2021 season has proven to be one were maybe starting to back the silver and black team is not such a farfetched idea.

It appears that moving to Las Vegas and being able to play in the new, over-the-top Allegiant Stadium has made the Raiders finally start to think about turning the page on their usual up and down dealings in the league to once again become a threat in the NFL. After scoring two wins against AFC rivals Ravens and Steelers, it’s becoming more and more apparent that buying into the hype surrounding the Raiders is not an idea to be taken lightly. While they still have a long road to go in the season, especially with the Chiefs and Chargers being the biggest threats in their divisions, here are our reasons why it’s time to start buying into the Las Vegas Raiders’ hype. Don’t miss out with the best lines at BetOnline!

Jon Gruden Is Finally Getting It Right With The Raiders

It took three seasons and two weeks of his fourth as the head coach of the Las Vegas Raiders for Jon Gruden to finally feel like his work with the team is starting to pay off significantly. Yes, when he came in, after signing a whopping 10-year, 100-million-dollar deal with the Raiders his first moves made not only LV fans but NFL fans across the league cringe. He traded defensive behemoth Khalil Mack to the Bears and then WR star Amari Cooper to the Cowboys, both for first round picks in the 2019 and 2020 NFL draft, all while signing some seasoned veterans to compliment his idea of surrounding this team by young rookie talents like Kolton Miller, Clelin Ferrell, Henry Ruggs III and Alex Leatherwood for example. Well, kudos to Gruden because this team is playing some of the most exciting football in the NFL.

This team has battled through any and all adversities that the NFL has thrown at them. From promising starts faulted by injury rampages to a move from Oakland to Las Vegas and the constant criticism that Derek Carr is not the QB that the team has needed, Gruden and his team have seen it all, but they have never backed away from the fight. While everything around Gruden and his team seemed to crumble, the coach asked for patience to be had in order for results to appear, and now, results are starting to pop off, making the Raiders not only a nice surprise for the season, but also a team that could become a potential threat in the AFC postseason picture if they continue in the way they’re playing football this season.

The offense has some good playmakers, the defense is as tough as Raiders fans like them to be and the spirits and energy in the roster are running higher and higher as days go by. Add to that the fact that now fans are able to go back into the stadiums, with Raiders fans being some of the most loyal and passionate in the league and this all adds up to a perfect equation for Gruden and his team to finally start raking in the benefits of the sacrifices made in the past few years.

Entering the 2021 season a lot of talks were had around the idea of seeing Derek Carr relinquishing his spot as starting QB of the Las Vegas Raiders for both the player and the team to start looking for new ventures moving forward in the league. Well, those talks have oficially started to be smashed into oblivion with the way that Carr has come out playing in the first two games of the new NFL season. In all honesty, Carr’s perception in the league has been one biased mostly because of his win-loss percentages in the past seasons.

If you take into account his numbers at least from the past three seasons, you will see that this is a QB that has passed for over 4,000 yards in each one of those seasons, with his passer rating percentages being between 90 and 102 in each of those three seasons. He has been deemed as an underrated QB, not because of his skill set, but more along the lines of how the team, in general, has played around him, but in this new season, things are looking better than ever for Carr and the Raiders.

In week 1 Carr put on a show against the Ravens with 435 passing yards and two touchdowns in what ended up being one of the most intense and thrilling games that Raiders fans have experienced in some time. Not to be outdone with that, against the Steelers in week 2 Carr came out swinging one again with 382 passing yards and 2 more touchdowns while leading the Raiders to a commanding win on the road against the ever so tough Pittsburgh Steelers. With the help of players like Darren Waller, Bryan Edwards, and Henry Ruggs III, Carr is playing at a level where if he continues like this, not only will the Raiders continue to flourish, but his MVP stock might be seeing a rise as well.