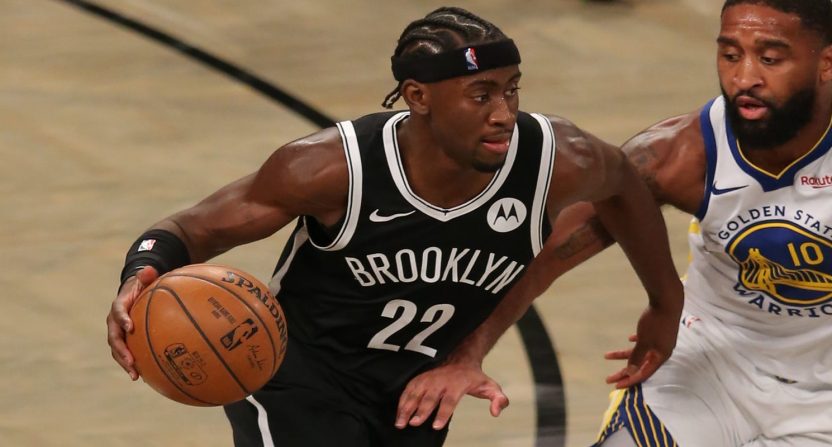 New Indiana Pacers star Caris LeVert reckons his recent trade from the Brooklyn Nets could have possibly saved his life.

The 6ft 6in guard had made a great start to the 2020/21 season with the Nets but arrived in Indianapolis as part of the James Harden trade that saw the Pacers send Victor Oladipo to the Houston Rockets. He was feeling fine when he got to the city, looking forward to making his debut with his new team.

Given his fitness levels, it was expected that LeVert would suit up for the Pacers at the earliest. However, he was treated to the surprising news of team doctors finding a small mass on his left kidney. At the time of writing, it was unknown as to whether or not the mass is cancerous – the payer is still awaiting test results.

While he may not have been eager to leave Brooklyn – the Nets are a championship contender, after all – Levert now realizes how important his inclusion in was. If he hadn’t been part of it, there’s no telling when or even if the growth would have been detected.

“I hadn’t missed any games this season yet. I was 100% healthy,” he said while on a video call on Tuesday. “In a way this trade showed and revealed what was going on in my body. So I’m definitely looking at it from that side and definitely humbled to know that that this trade could have saved me in the long run.”

It’s commonplace for teams to conduct physicals on players at the start of every NBA campaign but LeVert has no idea if the Nets even scanned his lower back. The Pacers’ medical team was able to spot the mass, thankfully.

“A lot of things crept through my mind,” the 26-year-old admitted. “I really didn’t know what was going on. I didn’t know the next steps, I didn’t know if the trade was going to go through. Obviously, it did and I think that’s a testament to this organization and not only how good of people they are but how much they believe in me. That was huge for me. I just can’t wait to get healthy and get back on the court.”

Levert spent the first four-and-a-half years of his career with the Nets. But it was actually the Pacers who drafted him as a first-round selection in 2016. He had a solid rookie season and has shown steady improvement, increasing his scoring average every term since then. He averaged a career-high 18.7 points per game last season and, prior to this month’s trade, was scoring 18.5 points a contest, along with a career-high 6.0 assists and 4.3 rebounds.

“To me, the most important thing is to get my body healthy and make sure I live a long life,” he remarked. “I’m not really looking at that (basketball) side of things right now. Obviously, I want to play as soon as possible. I’m a competitor. I love to play the game. But I think health wise, that’s the most important thing. As far as time line, we’ll figure that out in the future, but right now we just don’t have those answers.”

There’s no telling when he will be able to get back to playing, though. It’s hoped that the growth isn’t cancerous and, if that is the case, he’ll be back sooner rather than later. Until that becomes what obtains, the Pacers will be sorely short-handed. This is nothing new to NBA teams this season, with several players sitting out on a nightly basis across the board as a result of COVID-19 protocol. Players who are dealing with injuries can alleviate the pain with products such as CBD Oil.

The Pacers had fully expected to replace Oladipo with someone who could take on scoring duties as T.J. Warren is out indefinitely following surgery for a stress fracture in his foot. Head coach Nare Bjorkgran has expressed hope that Warren, the Pacers’ top scorer last term, returns in short order. However, he notes the team’s front office is continuing work on a rehabilitation plan.

The team’s center, Myles Turner sustained a fracture to his right hand last week. The NBA’s blocks leader might not need surgery, though he remains questionable.

At the time of writing, Turner was a possibility for the match against the Dallas Mavericks on Wednesday night. On a brighter note, Bjorkgren expects Jeremy Lamb to return “very soon.” Lamb hasn’t played since last February, having torn the anterior crucial ligament in his left knee, but is now practicing. The Pacers have a pretty tight schedule heading into February, with games against the Orlando Magic and back-to-back fixtures against both the Toronto Raptors and Charlotte Hornets. Games are coming thick and fast as the NBA looks to complete the first half of its season by March so there are plenty of NBA lines to be had.

“He could have very easily sat on this, sat out two or three weeks and no way – he’s not having any of it,” Bjorkgren said on Turner’s injury. “He told me he was practicing today. He’s been saying this for two or three days since that happened. So I appreciate the toughness and the persistence he has.”

Is journalistic integrity sacrificed when relationship between newsbreakers & sources becomes obvious? Does it even really matter?