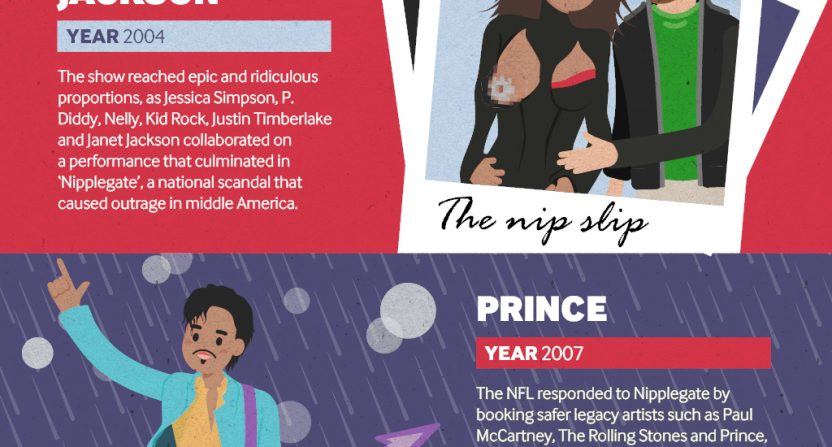 Michael Jackson, Prince and Lady Gaga have starred over the years, but for the first time since 1993, the Super Bowl halftime show has a credibility problem.

Gloria Estefan is performing the finale of a show that features dancers, a marching band and two former Olympic champion skaters.

It was a catastrophe for the Super Bowl’s organizers, who, as a result, aggressively recruited the biggest pop star in the world, Michael Jackson, in a bid to enhance ratings.

The King of Pop’s 1993 appearance helped to attract a television audience of 91 million viewers – the second-largest in Super Bowl history at the time and 12 million more than the previous year – and ratings actually increased between halves for the first time ever. If you want to bet on the big game, make sure to check out Betway for all the best lines, props, and odds!

Staging concert-style shows with global mainstream artists has worked for both the organizers and performers ever since.

The Super Bowl’s US television audience has never dipped back below 83 million, while artists who have done it enjoy a boost to both their profile and their sales.

The halftime show has grown to the point that it is discussed almost as much as the game itself, with online betting markets available to bet on the first song, costume changes and guest appearances.

In the past couple of years, however, the organizers have faced a new problem: attracting superstars.

The reason why is complicated, but it can be traced back to the continued exile of former San Francisco 49ers quarterback Colin Kaepernick, who protested the national anthem at the start of games throughout the 2016 season.

Jay-Z turned down the chance to appear in 2018 in solidarity with Kaepernick, while several mainstream artists rejected offers to perform at the 2019 show, including Rihanna, Pink and Cardi B.

The organizers have settled on Maroon 5 to headline this year’s show, with guest appearances from Travis Scott – who requested a $500,000 donation for charity Dream Corps to appear – and OutKast member Big Boi.

It’s clear that for the first time in more than 25 years, though, the show – previously considered a once-in-a-lifetime opportunity – is viewed by some artists as not worth their while.

It’s hard to believe, given how successful the blueprint created by Jackson’s 1993 performance has been.

His album, Dangerous, rose 90 places in the Billboard charts immediately after the show, and his 90-minute conversation with Oprah Winfrey nine days later remains the highest-rated television interview of all time.

Indeed, most artists have benefited hugely from performing at the Super Bowl.

Madonna, for example, saw sales of her back catalogue increase by 410 per cent after her appearance in 2012.

And in 2018, Lady Gaga’s album and single sales rose by over 1,000 per cent on the day of her acclaimed Super Bowl LI halftime show, with the buzz from that performance helping her secure a two-year residency in Las Vegas later that year.

To some artists, however, the halftime show hasn’t been quite so kind.

Janet Jackson is the most notable of those, with ‘Nipplegate’ being in-arguably the most infamous moment in Super Bowl history.

While Justin Timberlake was just as responsible for the wardrobe malfunction, Jackson took the brunt of the blame. Her music and videos were removed from all Viacom properties – including CBS and MTV – and her album, while critically acclaimed, under-performed commercially.

M.I.A. also saw her profile dip after she gave the camera the middle finger at Super Bowl XLVI in 2012 and was subsequently sued for $16m by the NFL, later settling out of court.

It’s a testament to the show’s pull, however, that artists continued – up until recently, at least – to jump at the chance to perform.

There’s no doubt that the NFL has benefited just as much from the switch to concert-style performances.

Ratings now typically rise at halftime as viewers tune in to watch the spectacle, and the last nine Super Bowls have all seen American television audiences of 100 million and above.

It’s clear, however, that the Kaepernick situation has hurt the NFL.

Ratings fell nine per cent from 2017, when Lady Gaga performed, and market share dropped below 69 per cent for the first time in eight years.

For that reason, the pressure is on for this February’s Super Bowl in Atlanta after the rejections from several big names have become so public.

A complete revamp of the halftime show is unlikely, but another year of dwindling ratings could force the NFL to change a strategy that has been incredibly successful for the past 25 years.