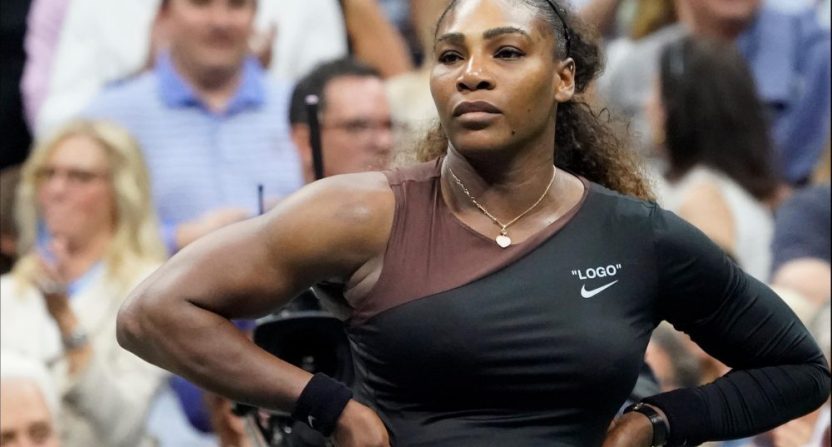 It’s safe to say that rarely has one tennis match transcended culture in this way. Barely over a week ago, the young tall Japanese, Naomi Osaka, beat the formidable Serena Williams in the US Open final, 6-2 6-4.

Serena is not really the kind of player that gets beaten 6-2 6-4. It’s a kind of score that pros would say they’ve ‘routined’ another player, ie beat them routinely. And Serena doesn’t really do anything routinely. Even when she beats people routinely, she doesn’t even really do that either, she actually annihilates them.

She has never got beaten routinely without going down with a fight. And on that evening, as the night sky got darker and the overhead lights got stronger, she ranted and tiraded the umpire who was not happy with her on court behaviour.

To start with she had lost the first set 62. Serena had been made to look pedestrian. Osaka was playing with poise and panache. This half Haitian half Japanese girl had everything. The experts in the know are betting she is a future world number one. She has the mind, she has the strength of leg, she has the fleet of foot and she has all the shots. A raking forehand and a thumping backhand. Like all the greats, Seles, Graf, Venus and Serena herself, she can produce winners out of nowhere.

At one all in the second set Serena looked like she was starting to play a little better. But Carlos Ramos, a veteran male umpire, suddenly announced to the court that he had seen Serena’s coach make a hand gesture towards his charge. Rightly, he gave her a verbal warning for receiving coaching.

Serena marched over to the umpire’s chair and told Ramos she never receives coaching, she didn’t see her coach, and it was grossly unfair. But the warning stood. The importance of the warning was this – it draws you one step closer to a point penalty.

Tennis pros would be happy to receive any amount of warnings if that’s all they were, but tennis pros absolutely hate to do one thing and that is lose a tennis point.

A few games later Serena made a routine backhand error to lose a game. As Osaka stated to walk to the chair, Serena slammed her racket down on the court with brute force. It splintered into a thousand pieces. Ramos had no other option than to warn Serena again But any second warning means an automatic point deduction.

She was hardly doing very well in the match as it was. She could ill afford to lose random point here and there. As Serena sat down at the change of ends she didn’t realise she had been docked a point.

When she stood up to serve again the umpire announced the score. Cue another Williams rage. Unfortunately for Williams she decided to call Ramos a thief and a liar. Again, he could only follow the rules of tennis as they are written. Players are not allowed to verbally abuse umpires. But this time a third warning means a whole game is docked.

Serena marched towards to chair in disbelief. She demanded the referee be brought on court. Osaka moved back to the service line and told the press later that she had been told as a junior, that when her opponent got angry it was best to look the other way and not get drawn into the emotion in front of her.

The referee came on court and backed up the umpire’s decisions. They could do little else. Serena, to her credit, then played out the rest of the match without a peep, and hugged her younger opponent Osaka at the net after the match was over.

The crowd were going wild for at least half an hour during this second set. Rarely had such hysteria been seen on and around a tennis court. Serena was so close to equalling the record total of grand slam singles championships, held by Australian Margaret Court. Court holds 24 trophies, and Serena is still stuck on 23.

It should be noted that had Serena got one more warning she would have been docked the whole match itself. At least she had the good sense to remain calm until she was beaten.

Serena herself especially framed her responses within a sexist framework. She said she was being penalised for being a woman. And that men had done far worse and not been panned.

Many male commentators, principally Andrew Castle, who was a pro player under the UK flag in the Eighties and Nineties, but has since gone on to have a glittering media career, criticised Serena harshly for calling the sexism card unfairly.

Perhaps the best of all comments on Serena came from Martina Navratilova, she wrote a long and highly considered opinion piece in an American newspaper, that both criticised and exonerated Serena. Martina made the valid point that Serena was fiercely robbed on the same court in 2004 when no fewer than three ridiculously bad calls went against her. It was said that this 2004 defeat to Capriati was the match that convinced the tennis authorities they had to bring Hawkeye into the game officially. So Serena has memories on the same court where she was genuinely robbed. But this still doesn’t excuse smashing rackets and trying to excuse her bad behaviour by pointing out the bad behaviour of others, especially when the data shows men and women get penalised and let off in equal amounts.

Like all discussions on Twitter you can find both supporters and detractors of Serena, but we think Navratilova has done an excellent job of analysing this great and slightly flawed (who isn’t?) champion.