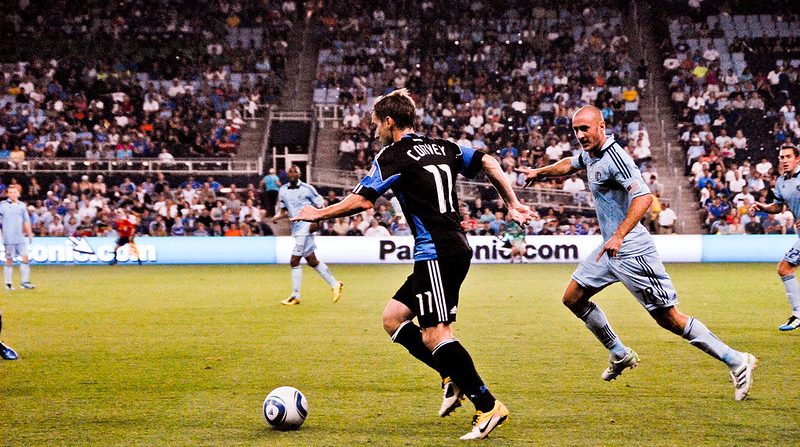 Across 2021, the regular MLS season saw New England Revolution dominate the Eastern Conference. Over in the West, the Colorado Rapids finished at the top of the league but neither team made it all the way to the MLS Cup final.

As those playoffs began, few could have predicted that the MLS Cup would eventually be contested by New York City FC and Portland Timbers. Both teams finished in fourth place in their respective Conferences and it just proves that, when the knockout rounds approach, anything can happen. If you think either team has what it takes to win it all, make sure to place your wager at BetOnline!

New England Revolution are known as the unluckiest team in the history of Major League Soccer having lost all five of their previous MLS Cup finals but many thought that this would finally be their year. Under experienced coach Bruce Arena, the team won the Eastern Conference by the huge margin of 17 points and they advanced to the postseason with the best league record of any side.

That record was good enough to take the Revolution straight through to the Conference semifinals where, after being held 2-2 in normal time by New York City FC, the team lost out via the lottery of the penalty shoot out.

Over in the Western Conference, league winners the Colorado Rapids could do no better as they lost 0-1 to the Timbers in their semi. It was a disappointing end for both teams but do their performances offer any positive indicators for next year?

The 2021 MLS season may be at a conclusion but teams are already preparing for 2022 and beyond. Over at underperforming Inter Miami, there have been some drastic changes with a large cull of the roster after the team failed to make it through to the playoffs.

Other franchises have taken a calmer approach but each will look to make changes ahead of the next campaign. As far as the sportsbooks are concerned, early MLS markets for next year show that the Seattle Sounders are clear favorites, followed by Los Angeles FC, Orlando City, New England Revolution and Sporting Kansas City.

Interestingly, the two teams who qualified for the 2021 MLS Cup Final, Portland Timbers and New York City FC, are some way down among the chasing pack.

As the new MLS season draws closer, more sportsbooks will become involved and those markets, as supplied by sbo.net, will expand. Visitors to the site can also keep updated with soccer via breaking news stories and opinion articles.

Anyone interested in taking things further can consider signing up with any of SBO.net’s panel of recommended bookmakers. Each of them are accepting new registrations and there should be welcome packages in place to add some extra value.

Once registered, there will be a choice of funding methods to get the account up and running while effective customer service and a range of additional sports are among the other advantages. It’s a comprehensive website but who are the frontrunners for the 2022 edition of Major League Soccer?

Does the league structure need assessing?

It could be argued that the current format of Major League Soccer needs addressing. If the fourth placed teams in the regular season are ultimately competing for the biggest piece of silverware, is that really fair on the clubs that finished at the top?

For the New England Revolution and Colorado Rapids there are some consolation prizes. They have new Conference titles to their names and both teams are guaranteed a place in next year’s CONCACAF Champions League.

Those further down the table got what their seasons deserved as they finished outside the playoff places but is a final between two fourth placed teams really the best way to bring the season to a conclusion?

Perhaps it’s time to introduce a separate MLS Cup alongside a season long league title. By doing so, it would be sufficient reward for those who top the tables after a grueling league campaign.

The issue is that most major sports leagues in the United States work in this way: A postseason of playoffs follows a divisional campaign and it adds excitement to the closing stages. MLS may have exposed an unfairness in the process but it’s unlikely that anything will change.

Kendrick Perkins implores ESPN to stop talking Lakers: "The world is tired of talking about them"

Two black bears were videoed wrestling on a backyard trampoline

After years of major defections, ESPN has a new way to outspend competitors for key talent

What's the deal with Adam Schefter?