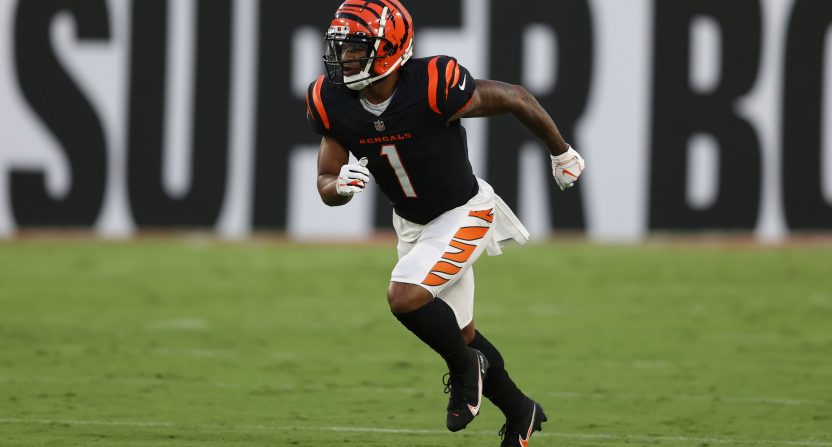 Right after the 2021 NFL draft was done and over with, there were already football stats experts making very early predictions on who the best-fitted candidates to win both the Offensive and Defensive Rookie of the Year award for the season would be.  When it came to the offense, the conversation appeared to start and finish with former Clemson and now Jacksonville QB Trevor Lawrence taking the award by a landslide, but after a very rough welcome and awakening into the league for Lawrence, it seems like the tides are changing and not necessarily in his favor. On defense, the predictions at least seemed to be more leveled with no clear favorites jumping out ahead from the get-go.

Now, with the 2021 NFL season fully underway and with most of the top caliber rookies all making their presences felt in the league, let’s get to talking about two players, one on the offensive side of the ball and one on the defensive side that is already making very strong cases for their respective Rookie of the Year awards. If you’d like to wager on who wins, make sure to check out BetOnline!

There once was a time in college football where Joe Burrow and Ja’Marr Chase were one of the best, if not the absolute best QB-WR duo in the country. While Burrow took his talents to the NFL a year before Chase to become the Cincinnati Bengals’ new franchise QB, with Chase staying at LSU for one more season, it was in 2021 that the Burrow-Chase connection once again met, this time in Cincinnati, and it feels like they have not skipped a beat whatsoever, mostly thanks to Chase.

The former Tiger, now Bengal, has come in firing on all cylinders and has become one of the absolute best wide receivers in the league early on in the season. His positioning skills are top-level, his route running is elite and given that he and Burrow have a very illustrious past together, his transitional period into the league has been almost flawless. Chase is leading all rookie receivers this season with almost 300 yards to his name as well as 4 touchdowns already scored and an average of 17.5 yards per catch.

Those are numbers that not only put him on top of all other offensive rookies in the league but also put him right up in the conversation of the best offensive players in the league right now. Given that Cincinnati is still sold on having a strong-rush first offense, this will continue to end up helping both Burrow and Chase as their connections will continue being more and more significant and with higher chances of yardage gains and scores as well.

The Dallas Cowboys went from having two of the best defensive players in the game in DeMarcus Lawrence and Jaylon Smith, to having to deal with an injured Lawrence whose timeline to come back still has a few weeks in it, and a just recently cut Smith who didn’t take long at all to join the Green Bay Packers. So what does that leave the Cowboys with? Former Penn State defensive behemoth and rookie linebacker Micah Parsons. While at first, everyone thought that the Cowboys’ strategy in the draft would revolve around surrounding Dak Prescott with more offensive weapons to bolster the offense with, it came as a shock, now a very pleasant shock when Dallas used their first pick of the draft to select Micah Parsons. And in all honesty, to say that their pick has paid off, would be a very light way to put it.

The former Nittany Lion has been putting up some stellar numbers in his first games in the pros, with 17 tackles and 2.5 sacks already recorded and two pass deflections as well. He had a first taste of the NFL playing against Tom Brady’s Buccaneers offense in Week 1 and showed that he has no problems whatsoever hanging with the big boys. As he continues to grow into the league and with Lawrence’s comeback to the lineup still up in the air, Parsons has all it takes to become the new leader of this Cowboys defense and be a shoo-in for Defensive Rookie of the Year.

The life and death of NBCSN

Eli Manning was the breakout star of the ManningCast's inaugural season

The best and worst of the 2021 NFL regular season