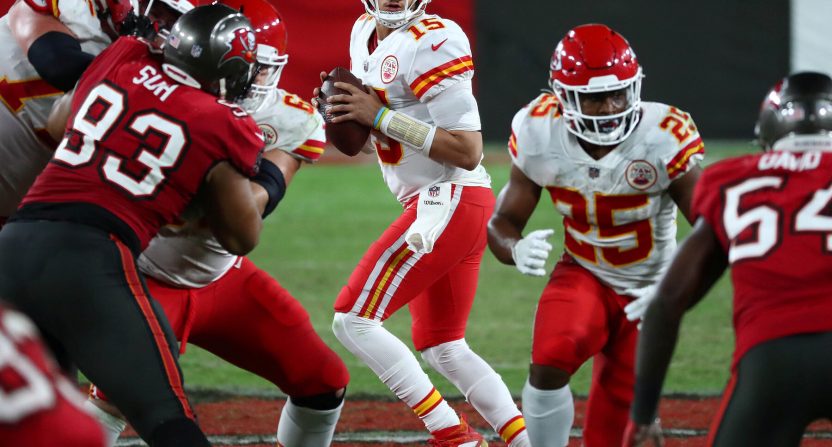 NFLBy Next Impulse Sports on September 16, 2021

The NFL action is finally back, as we rejoice with the start of one of the most promising football seasons in the past few years. The first season to feature an expanded schedule consisting of 17 games in 18 weeks, this year also marks the first season with a modified jersey numbering system, which was heavily criticized by Tom Brady. The 2021 NFL season will conclude on February 13, 2022, with Super Bowl LVI at SoFi Stadium in Inglewood, California.

The first week of the regular season started last Thursday, with the reigning champions Tampa Bay Buccaneers defeating the Dallas Cowboys, in a thrilling game that was decided by Tom Brady, who led the game-winning drive with just over a minute on the clock. Weekend action went through with several exciting games, including the Saints blowout victory against the Packers, and a surprising win for the Steelers over the Bills at Highmark Stadium. To end Week 1, the Raiders beat the Ravens on Monday Night Football.

After Week 1, the Kansas City Chiefs remain the odds-on favorites to win Super Bowl LVI, at +500 odds. The Tampa Bay Buccaneers are just behind, with +550 odds, followed by the Los Angeles Rams, Buffalo Bills, and San Francisco 49ers, with a significant drop off in odds. If you’re still unsure about how odds work and the probabilities they imply, be sure to check this guide on how to read betting odds.

The Chiefs remain at the top

Despite the loss at Super Bowl LV, the Kansas City Chiefs are still a powerhouse in the AFC, with a talented offense headed by Patrick Mahomes, one of the best and most versatile quarterbacks in the NFL, and a strong defensive unit led by the Honey Badger Tyrann Mathieu. Even though they’ll face a tougher division this year, the Chiefs remain one of the best teams in the league, and are certainly worthy of being the favorites once again.

In Week 1, the Kansas City Chiefs hosted the Cleveland Browns, and were just a quarter away from losing the season opener. However, in the fourth quarter, Mahomes led the team to the victory with touchdown passes to Tyreek Hill and Travis Kelce, as the Browns let the game slip away with an inexplicable drop by punter Jamie Gillan and Mayfield’s interception with just over a minute to go. Next, they travel to Baltimore to go up against the Ravens on Sunday Night Football.

Brady and the Bucs in contention

The defending champions Tampa Bay Buccaneers have a tough journey ahead on their chase for back-to-back titles. But if there’s one player who can pull this off, it’s Tom Brady, the last quarterback to do so, when he led the Patriots to consecutive titles in 2003 and 2004. But besides Brady, the Buccaneers return almost the entire roster from last season’s campaign, which is enough to put them as one of the main contenders for Super Bowl LVI.

In the 2021 NFL Kickoff Game, the Bucs defeated the Dallas Cowboys, with the 44-year-old quarterback leading the team to a last-minute win. Despite throwing two interceptions, Brady finished the game with 379 yards and four touchdowns in the 49th fourth-quarter comeback of his career. Kansas City also relied on good performances by Chris Godwin, Rob Gronkowski, and Antonio Brown, who all scored in the game. In Week 2, they will face the Atlanta Falcons, at Raymond James Stadium.

Los Angeles Rams on the rise

The arrival of former No. 1 pick, quarterback Matthew Stafford, and one of the best defenses in the league should be enough to make the Los Angeles Rams one of the top contenders for this year’s title. The team will try to improve on the 10-6 record from last season, and attempt to play Super Bowl LVI in their home stadium, to become the second team in NFL history to do so. With the likes of Stafford, Aaron Donald, and Jalen Ramsey, the Rams are certainly capable of achieving that feat.

In their season opener, the Rams hosted the Chicago Bears and Stafford immediately showed his potential, in a dynamic debut in which he led the team to a comfortable win with three touchdown passes and 321 yards. After this victory, the Los Angeles Rams saw their odds at the title increase, rising to +1200 odds. In Week 2, they travel to Indianapolis to face the Colts.

Ryan Clark walks off Get Up! set after Rex Ryan's "toe expert" joke

Why doesn't ESPN cover college football like it does the NFL or the NBA?

Eli Manning was the breakout star of the ManningCast's inaugural season