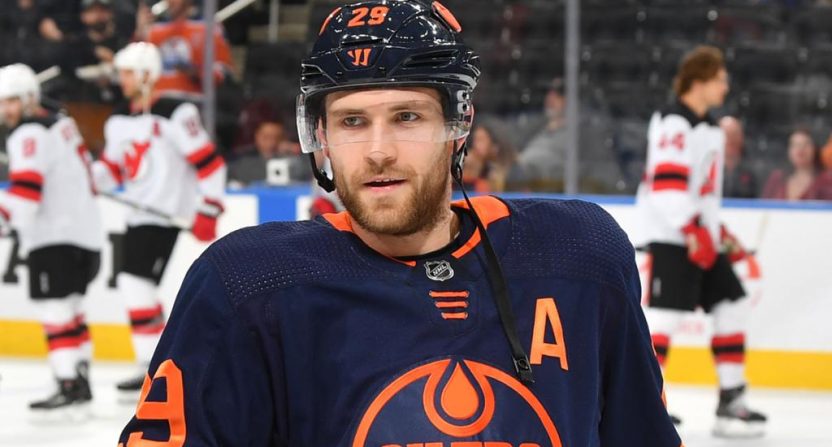 The NHL ended weeks of speculation when it announced the three finalists for the prestigious Hart Memorial Trophy. The award goes to the player judged the most valuable to his team over the course of the regular season, and previous winners include Wayne Gretzky, Gordie Howe and Sidney Crosby. If you think you know who’s got what it takes to win, check out these lines and more at BetOnline! These are the three elite stars in the running for this year’s prize:

The Oilers center led the league in scoring after racking up 110 points in just 71 games before the season was brought to an abrupt halt in March. The 24-year-old German superstar spent more time in ice per game than any other forward in the league, and he was exceptionally productive during that time. He had more points per game and game-winning goals than any other player, and finished second for even-strength points and power play goals. He hit at least one point in 56 out of 71 games and managed an impressive 33 multipoint games.

Teammate Conor McDavid was actually the favorite for the Hart Memorial Trophy in the pre-season hockey betting lines, ahead of holder Nikita Kucherov. McDavid remained the favorite for the majority of the regular season, but he missed a number of games in January and February, and Draisaitl stepped up to lead his team to a 37-25-9 record. He has carried the Oilers since the start of 2020, and he will be key to their chances of success in the expanded playoff format. The Oilers will play the entirety of the playoffs in the home city if they manage to go all the way to the Stanley Cup Finals, and they might just pull it off if Draisatl maintains his sensational performance levels.

Draisaitl is the favorite to win the Hart Memorial Trophy thanks to his eye-catching performances this season. He would become the fourth Oilers player to win it, following in the footsteps of eight-time winner Gretzky, Mark Messier and teammate McDavid, who prevailed in 2017. He would also become the first German-born player to clinch the trophy, which could boost the league’s profile in Europe.

MacKinnon has been supremely consistent for the Avalanche this season. The 2013 first draft pick has long been considered one of the best players in the league, and he is a regular in the NHL All-Star Game. He was nominated for the Hart Memorial Trophy two years ago, and many fans feel it is now time for him to win it. His numbers do not quite stack up against Draisaitl’s – MacKinnon finished fifth in the NHL with 93 points (35 goals, 58 assists) in 69 games, and third in even-strength points – but his all-round contribution has been magnificent.

The Avalanche were without wingers Mikko Rantanen and Gabe Landeskog, but MacKinnon’s production did not dip at all. He dragged the injury-ravaged Avalanche to the second best record in the Western Conference through sheer force of will and talent, and he has adapted brilliantly to whomever he has played with. The Avs were just two points behind the Blues at the top of their division when the season was suspended, and they had played one game fewer, so they could well have finished first. MacKinnon is also a Lady Byng finalist as a result of his sportsmanship and gentlemanly conduct, and he would surely make a popular winner of this prestigious trophy.

The Russian left winger has made a flying start to life in New York after moving to the Rangers from Columbus last summer. He set a franchise point-scoring record for the Blue Jackets last season and he was handed an annual salary of $11.6 million, so the fans had sky-high expectations, but Panarin has actually managed to exceed them. He set a new career-high 32-63-95 to help the Rangers improve their points tally compared to the previous season, despite playing 12 fewer games.

Panarin topped the league in even strength points and even strength assists, which helped him become New York’s first Hart Memorial Trophy since Henrik Lundqvist eight years ago. The 2015-16 Calder Memorial Trophy winner is now operating at the peak of his powers, and he finished second in the league for assists and plus/minus. His contribution for the Rangers was immense, as he played a career-high 20:36 minutes per game, logged a career-low 20 penalty minutes and contribute 20 more points than his closest teammate, Mika Zibenejad. The Rangers were poor throughout the regular season, but they have clinched an unlikely spot in the expanded playoffs and that is largely a result of Panarin’s individual brilliance.

Who will win the Hart Memorial Trophy?

It appears to be a toss-up between Draisaitl and MacKinnon. Draisaitl tore in up in New York and he deserves his status as a Hart Memorial finalist, but he should finish third in the voting. MacKinnon was a lot more consistent than Panarin over the course of the season, and he was the joint favorite alongside McDavid by January. McDavid’s chances fell away after he spent February on the sidelines, and suddenly teammate Draisaitl stormed into the lead after his four-goal, five-point night when the Oilers routed Nashville. MacKinnon was on fire before the coronavirus pandemic brought the season to an end, and he established himself as the clear second favorite, whereas many felt that David Pastranak would beat Panarin to a finalist spot.

It looks like a really close contest between Draisaitl and MacKinnon. The Oilers center has already been rewarded with the Art Ross Trophy and both men are Ted Lindsay Award finalists, so it will be interested to see how the Professional Hockey Writer’ Association members vote. It is easy to see why Draisaitl is the favorite, but the Oilers had McDavid and Draisaitl thriving in tandem for much of the season. This is an MVP award, and MacKinnon has arguably been more important for his team. He recorded 43 points more than his closest teammate, Cale Makar, and that is the largest gap between a team’s top scorers since Capitals star Alex Ovechkin won this award in 2007-08. The Avs ended up with a better record than the Oilers, and MacKinnon was the star of the show, so that could be enough to swing it in this award in his favor.

What is fair when discussing nepotism in sports broadcasting?