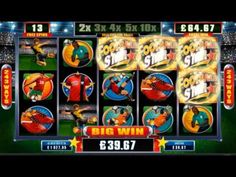 GamblingBy Next Impulse Sports on June 19, 2020

Arrigo Sacchi once said, “Football is the most important of the unimportant things in life”. With the level of popularity this sport enjoys today, we can say without a doubt that he was right. Even people who aren’t football fans can be found in front of the TV whenever the World or European Championships broadcast, along with the League of Champions. Football has made a huge impact on the world, especially in the gambling industry.

A big part of online gambling goes to sports bets, with football being the leader among the events. But it can also be found in other parts of the industry, like on video slots. Today pretty much every software provider has at least one football slot in its ranks. This way you don’t have to wait for the game to start. All you need to do is open the slot and start playing. Let’s see which are the best football slots according to theslotslad.com.

Microgaming is a software provider with a massive game offer, so it’s natural to see several sports slots at their casinos. Their sports slots are depicted in the Stars series, dedicated to sports like Hockey, Basketball, and Football. For these games the designers went with pretty much the same design, only changing the symbols and theme. So what can you expect to see?

Well, Football Star comes with a modern 243 ways to win design, with bets starting from 0.50 per spin. The game comes with a big payout potential thanks to the Stacked Wilds which can land on reels 3, 4, and 5. Combined with the 243 ways to win design it’s easy to see the potential for big wins. But that’s not all. The game also comes with a free spins bonus and a Rolling Reels feature with increasing multipliers. Once a win is formed new symbols will land to replace the wining symbols making way for consecutive payouts. Each one increases the win multiplier up to a maximum of x10.

Shoot! started as a popular British magazine dedicated to football. It had thousands of loyal subscribers and managed to grow to one of the most popular sports magazines on the island. The level of its glory is clear since Microgaming decided to dedicate a slot game to them.

Released under the same name Shoot! is a football slot which takes you back in time when stars like Maradona, Beckenbauer, and Pele were the kings of the football fields. The slot also has an interesting set of bonus features. When 3 or more Bonus symbols hit the reels the Trade’em Multilevel bonus is triggered. Here you need to make your picks among 12 football stars by choosing 4 cards and getting cash prizes in return. You also have a chance to reveal the free spins bonus. Here you can be awarded up to 35 free spins and an x2 win multiplier.

NetEnt also decided to dip their toes into the football slots waters. They released Football: Champions Cup in time for the 2016 Euro championship, so the game quickly gained popularity across NetEnt casinos.

Like most other NetEnt slots Football: Champions Cup has an interesting set of bonus features. Once you land 3 Bonus symbols across the reels you enter the bonus game as a goalkeeper. Your job is to protect your goal at all cost and win hefty prizes along the way.

The slot also offers a free spin bonus triggered by landing a Scatter symbol on the 3 central reels. In this feature, you compete against other teams in the tournament. Land a Blue Wild on reels 1 and 2 to score a goal or a Red one on reels 4 and 5 to miss the goal. Defeat the opposing teams and take the trophy in the tournament.

Yes, football does rule, and Playtech proved that early on. This slot is part of their older slots collection, but it’s still quite a popular game even today. With a simple design and visual details, Football Rules brings a lot of excitement to the reels. Don’t mind the Scatters, they only award a payout of up to 50 times the total stake.

Keep an eye out for the Bonus symbols which can land on reels 1 and 5. When this happens you enter the free spins bonus. Make your choice among the 6 balls to see how many free spins you get. Shoot the ball and see what the win multiplier is going to be. You can land an unlimited number of re-triggers, paving the way for massive payouts.

Religion of Champions Brazil is a football slot dedicated to the Brazil World Championship. The designers did a great job with this game in pretty much all sections. The gameplay is fast and exciting, with well-designed symbols and attractive animations. My favorite part is the sounds you get when the reels’ spin and when a win lands. They make up for a real stadium atmosphere and bring excitement to the reels.

But the game also has a lot to offer when it comes to bonus features. With its stacked symbols Religion of Champions Brazil can produce frequent small to medium payouts. But the real fun begins when you land 3 or more Scatters on the screen. This triggers the free spins bonus where you get 10 free spins and a Most Valuable Player symbol. This is one of the high paying Football Player symbols, which will expand when it lands on a reel. This way you have a chance to land a full screen of identical symbols and a big payout.

RTG is also one of the designers who decided to create a football slot early on. Football Frenzy is what they came up with and they did a bang-up job. Since it’s a part of their older slots collection the slot doesn’t have modern animations or visual details. But this is a fun game to play where you can choose among a Striker and Lucky Mode.

Base play can bring you a Stacked Wild on both reels 1 and 5, making way for 5 of a kind payout. What’s even better is that all Wild Wins are doubled in size. You can also trigger the free spins bonus where you get a total of 8 free spins. All you need to do in the end is to hit the goal and get even bigger wins.

Bicicleta is a great football slot coming from the Yggdrasil factory. Inspired by the popular Bicycle kick the game brings a lot to the table. With state of the art aminations, great background sounds and a fast-paced gameplay Bicicleta is guaranteed to catch your attention.

During base play, you can land a trophy symbol on the last reel. It can bring you a coin payout of up to 1,000 coins or award you the free spins bonus, with anywhere from 8 to 12 free spins. During the feature whenever a Player symbol lands on the reels he will try to score a Bicycle goal. If he succeeds he is transformed into a Sticky Wild. Also, keep an eye on the second reel. Here the Trophy symbol can land awarding 2-4 free spins, a Wild Reel, or a payout of up to 1,000 coins. With some luck on your side and a lot of goals Bicicleta can easily produce massive payouts on the reels.

NFL stadium rankings based on Yelp and Foursquare reviews

Seven NFL teams with the best chances to become dynasties