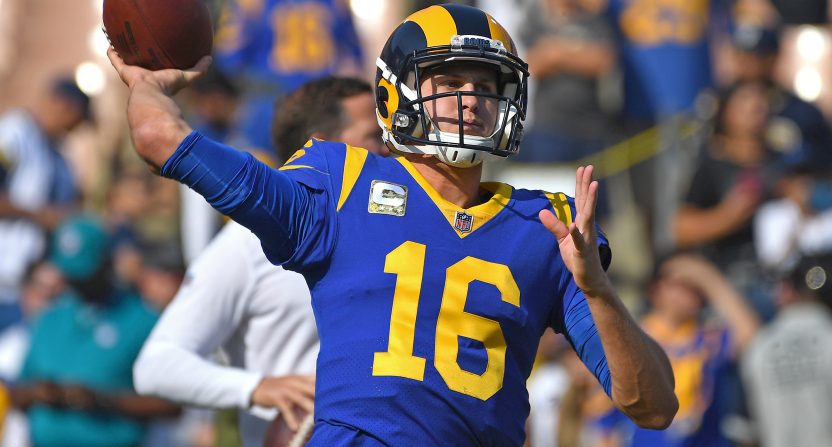 The Los Angeles Rams have not looked quite as dominant as the team we saw last season. L.A. is 4-3 through 7 games, which is good for third place in their own division. The Rams are currently looking up at the 6-0 49ers and 5-2 Seahawks in the NFC West. Fortunately for them, there is more than enough time left in the season to make up some ground.

Sean McVay’s team hasn’t been the most consistent so far. They got off to a strong 3-0 start with wins over playoff hopefuls in Carolina, New Orleans and Cleveland, only to drop each of their next 3 against Tampa Bay, Seattle and San Francisco. The Rams got back into the win column with an easy 37-10 trouncing of the lowly Falcons in Week 7.

While things haven’t gone all that smoothly for this team as we near the halfway point in the season, there is reason for optimism. I still have enough doubts about the Niners to where I don’t believe they’re going to run away and hide with the division in hand. The Seahawks have question marks, as we saw in last week’s home loss to the Ravens. The Rams have as much, if not more, talent than both of those teams combined.

Most NFL betting sites aren’t all that optimistic regarding the Rams’ chances of winning Super Bowl LIV. Entering Week 8, Los Angeles is listed between +2500 and +3000 to win it all this season, which is fairly stunning considering this team just played in Super Bowl LIII earlier this calendar year. The Rams don’t even have the second-best Super Bowl odds among NFC West teams at this point.

The Rams’ bold decision to trade for Jalen Ramsey last week will pay dividends. Seemingly out of nowhere, Los Angeles’ front office forked over a pair of future first-round picks in exchange for the disgruntled former Jaguars star. The Rams lost Aqib Talib to injury, while Marcus Peters was traded to the Ravens shortly before the move to land Ramsey. While dealing premium future picks like that always carries plenty of risk, it’s also the kind of win-now move the Rams have been known to make over the past couple of years.

The Rams tried to go all-in last season by acquiring players like Dante Fowler, Ndamukong Suh and Brandin Cooks. While it didn’t quite work out in the end, it’s hard to fault Los Angeles for going for it. Rather than fielding a mediocre team, the Rams’ front office and ownership group decided that those kinds of moves were necessary in order to help win over a new fanbase in Los Angeles. The moves nearly amounted to a Super Bowl title.

L.A. lost some key players this past offseason, but they did sign capable veterans like Clay Matthews and Eric Weddle to help make up for those losses. The Ramsey move is the latest indication that the Rams are serious about winning at all costs as soon as possible.

Ramsey’s impact was evident from the jump. He was everywhere in his first game for the Rams last week in Atlanta, and he spent most of the afternoon shadowing the Falcons’ best player, Julio Jones. The Rams’ defense smothered Matt Ryan and company all day long, and Jones was limited to 6 catches. The Falcons didn’t even find the end zone until Austin Hooper scored late in the fourth quarter with the game out of reach.

The Rams stormed their way through the NFC thanks to a dynamic, innovative offense last season. Based on the results so far this season, it’s not unfair to say that the league may have figured out how to combat some of McVay’s creativity. Through 7 games, L.A. is averaging 27.1 points per game, which is tied for seventh in the NFL. Last year, the team averaged 32.9 points per game, which ranked second.

Jared Goff has looked shaky at times, while Todd Gurley has looked like a shell of himself. While I do have concerns that Gurley may never be the same player he once was thanks to some lingering knee troubles, the Rams do have enough depth at the position to make up for it. Malcolm Brown is a very capable backup, while rookie Darrell Henderson has shown flashes in limited playing time.

I am not worried about the Rams’ offense in the long run. Goff still has Cooks, Cooper Kupp and Robert Woods at his disposal in the passing game, while Gerald Everett is emerging as another weapon at the tight end position. The offense looked hopeless in the Super Bowl, but Goff will be better as a result of the humbling experience. This is effectively the same offense we saw last season, so I’d expect them to improve as the season progresses.

Ramsey’s acquisition provided a much-needed jolt to the defense. Aaron Donald has continued to look like the best defensive player on the planet this season. The Rams rank in the bottom-half of the league in points allowed per game to this point, but I would be surprised if they didn’t improve on that side of the ball, as well.

If Goff can find some consistency, there is no apparent weakness with this roster. McVay has proven that he can stay ahead of the curve when it comes to play-calling, and there is no obvious frontrunner in the NFC. The Patriots may loom over the AFC, but the Rams’ conference is there for the taking. I expect Los Angeles to take the opportunity.

The other NFC contenders all have their own question marks. The Saints have a 40-year-old quarterback. The Seahawks are lacking in talent outside of Russell Wilson and a couple of other players. The 49ers are rife with inexperience. The Panthers may have a quarterback controversy on their hands. The Packers, Vikings and Bears seem ready to cannibalize one another in the NFC North.

With no clear-cut favorite in the conference, there really is not much downside to taking a flier on the Rams at their current odds. The profit potential is massive, and this is largely the same team that represented the NFC in the Super Bowl just last season. You are getting incredible bang for your buck on the Rams at their current odds between +2500 and +3000 to win Super Bowl LIV.

ESPN is bringing back the 'This Is SportsCenter' ad campaign

Will the Jeff Saturday hire make the NFL coaching cycle even worse?