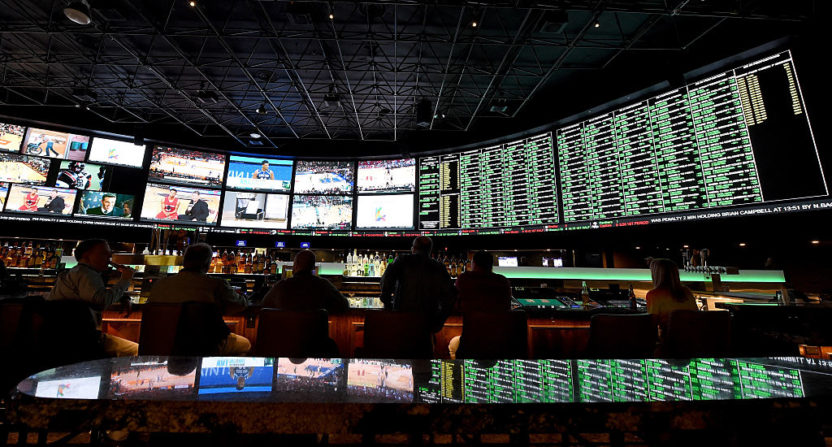 Imagine this scenario: A guy is sitting down on his couch, chugging down on his beer while watching an NBA game. His team is the Detroit Pistons, a heavy underdog against the Golden State Warriors. As the buzzer sounds, the guy jumps up in joy as his team won the game. In fact, he jumps too much, as if he won the game himself.

Why do you think he does this? Is he a part of the Detroit Pistons? Is he part of their coaching staff? Is he a die-hard pistons fan? Or does he just hate the warriors? The answer to these questions might be a 98% no, 1% yes, or a 1% maybe. However, we should always consider a more simpler question as to why this guy is celebrating like crazy: Did he bet on the pistons?

As you can see, betting on sports is a fun thing to do, especially if you win with an underdog. Betting is an exciting thing to do as it requires time, knowledge, and sometimes, pure luck to favor you and your picks. So why do people do it?

Nothing beats the fun out of predicting which team will win or lose. Although watching a game, a race, or a match, is fun, adding a little odds to it makes it even more exciting. At its core, betting is all about the awesome feeling of seeing an underdog win against a favorite.

To be successful in sports betting, you have to have a considerable amount of knowledge of the sport you’re betting on. For basketball, most people who do serious betting often check reports and the rosters of the teams they’re betting on. These people check the status of the teams that are playing in an hourly or even minute-to-minute basis. Any injuries or changes to the rosters can gain or lose favor for the bettors.

For some, sports betting also allows them to get to know other sports or games. There are a lot of sports to bet on, which we’ll discuss in the latter part of this article.

Sports betting is a growing industry with lucrative payouts for the lucky and the prepared. The potential to make a big fortune out of a $5 bet is too much to ignore for some. The chances of getting a good payout of a small bet are because of the odds.

A lot of people often place small amounts on picks to win a moderate amount if they win. Some even go all in, placing large bets on weak picks to get even more. Again, with the proper research, preparation, a bit of luck, you can make serious amounts of money with sports betting.

What are the sports that you can bet on?

Combat sports generate a lot of income for their fighters or participants. Boxing, MMA, Muay Thai, and all other combat sports are exciting and often finish in stunning fashion. What better way to add to the excitement than placing bets on your fighters? Upsets are rare, but they do happen. And when it does, those who choose the underdog usually have the best payouts.

Take for example, the Pacquiao-Dela Hoya fight. The odds were quite close, but did you know that Manny was an underdog going to that match? Bettors who chose the pac-man that day jumped for joy as Manny convincingly won the fight, with Dela Hoya and his corner throwing in the towel before the start of the 9th round.

In the past, there were lots of betting involved in racing games. In fact, greyhounds in the past were favorite sports to bet on. Today, greyhound racing remains a popular sport. There are lots of racing games to bet on, such as NASCAR and the derby.

One of the most legendary events when it comes to racing is the Kentucky Derby. No, they don’t race cars or greyhounds here, they race horses. The Kentucky Derby is also known as the “Run for the Roses” as the winning horse gets draped with roses. TVG Kentucky Derby is popular among the masses and the reason why a lot of people go to the derby.

A lot of people nowadays are noticing E-Sports. Just recently, Fortnite, a game usually played by kids, had the first-ever Fortnite world cup, where the winner was 16-year old Kyle Giersdorf. The prize was a whopping $3,000,000.

DOTA was another famous game that had their annual tournament called “The International.” The competition had global coverage as lots of teams from all over the world represented their countries. The winning team of the tournament was OG, who won a ridiculous amount of $15,603,132. Betting is available in E-Sports, and it wouldn’t be wise not to notice the potential money it brings in for its players and bettors alike.

Sports betting is indeed an excellent way to have fun while earning money. You just need to be prepared to know which odds are in favor. Nowadays, betting can be done on almost any sport. From MMA to horse racing, Golf to DOTA, the world of sports betting just keeps getting better.

Marshawn Lynch immediately regrets cursing in interview, then does so again

ESPN is bringing back the ‘This Is SportsCenter’ ad campaign