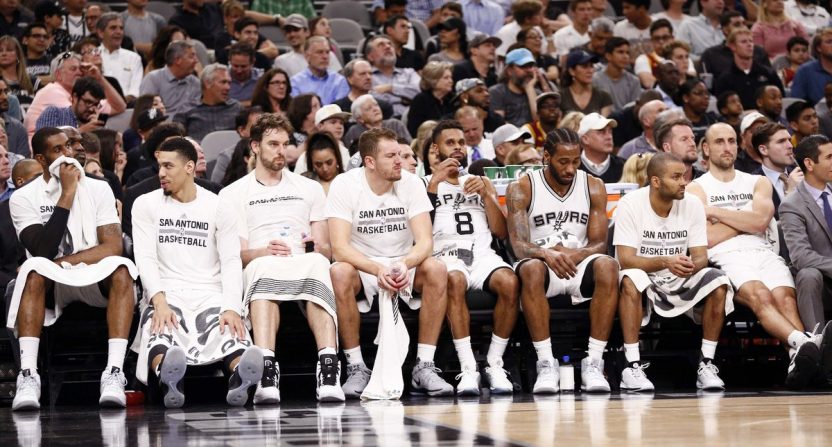 The San Antonio Spurs have become a model of tenacity in this wild NBA era. For an organization that has gone through a lot of drastic changes over the past nine months, the Spurs somehow and someway are still clinging into the No.8 spot in the Western Conference.

Of course, reaching the playoffs as one of the lower-seeded teams isn’t truly an accomplishment by Spurs’ standard. However, it’s noteworthy that this team refuses to quit despite losing a superstar to a trade, an up-and-coming point guard to a season-ending injury and recently one of their locker room leaders to a buyout agreement.

Let’s see how the Spurs coped with every challenge they have faced throughout the season.

Problem No.1: On July 18, 2018, the Spurs ushered in a new era by trading superstar wingman Kawhi Leonard and Danny Green to the Toronto Raptors. It was the culmination of a yearlong tension between Leonard and the Spurs front office as a simple misdiagnosis of a quad injury led to an inevitable trade request last summer.

The Solution: With Leonard gone, the Spurs lost a bona fide star player and probably one of the top three small forwards in the game (other than LeBron James and Kevin Durant). San Antonio did get a nice haul in expense of Leonard. They acquired perennial DeMar DeRozan, Jakob Poeltl and a protected 2019 first-round from the Raptors.

DeRozan isn’t quite on Kawhi’s level of efficiency but he gets the job done. This season, the All-Star guard has become a better all-around player, averaging 21.5 points on 47.2 percent FG shooting, 6.2 rebounds and 6.1 assists in 35.2 minutes per game. Although DeRozan is still a terrible 3-point shooter at 17.1 percent, his mastery of the mid-range game allows head coach Gregg Popovich to greatly exploit this season.

Problem No.2: In a preseason game against the Houston Rockets last October 8, 2018, third-year guard DeJounte Murray suffered a torn right ACL while trying to get past James Harden in a fastbreak play. The injury was devastating for the Spurs considering that Murray was supposed to be the starting point guard for the 2018-19 NBA season. He’s coming off a strong second year in which he averaged 8.1 points, 2.9 assists and 5.7 assists in just 22 minutes per game. He also received an All-Defensive second team selection that year, looking like another two-way star in the making.

Solution: the Spurs made the adjustment by handing Derrick White, a natural shooting guard, the playmaking reigns. The second-year guard out of Colorado upped his production to 9.7 points, 3.6 rebounds and 3.7 assists in 25 minutes per game this year. Patty Mills served as the stabilizer in the backcourt, chalking up 9.9 points and 3.0 assists per ballgame. The Spurs no longer have a very productive point guard like Tony Parker, yet they are still able to run the system well with DeRozan acting as the main orchestrator.

Problem No.3: The Spurs and Pau Gasol reached a buyout agreement last week, allowing the former All-Star forward to join the Eastern Conference favorites Milwaukee Bucks for the remainder of the season and the postseason. It’s an understatement to say that the 38-year-old Gasol is in the twilight of his career. However, Gasol can still produce quality numbers in spot minutes and actually serve as a good locker room leader.

Solution: Gasol’s departure is hard but it frees up a roster spot that could be used for a more serviceable player. Right now, the post-buyout market features interesting names like Carmelo Anthony, Marcin Gortat, Malachi Richardson and Greg Monroe. Still, the most intriguing prospect for the Spurs is Shabazz Muhammad, who is fresh from 30 points per game outing in the Chinese Basketball Association.

With roughly four weeks left in the regular-season schedule, the Spurs understand that they have to scratch and claw their way towards the playoffs. The franchise hasn’t missed the NBA postseason since 1998, so everybody– including betting enthusiasts – are monitoring how the Western Conference playoff race would shape up.

'Saved by the Bell' reboot: Zack Morris returning as governor of California, Kelly Kapowski also 'in talks' to return

What's the best streaming service for a sports fan? 2020 edition

Four ways the XFL can be successful this time around

"That got weird": 8 things we learned watching the XFL's opening weekend

The Big Dance season is almost here, and huge basketball hoops are on their best feet forward, preparing...

Our society tends to place professional athletes on a pedestal. They’re famous, talented, and easy to root for...

Euro 2020 takes place across 12 cities in as many UEFA countries this summer, in a unique format...

With or without Tom Brady, the New England Patriots will always command respect – not to mention a...

The art of the demotion: some of the most prominent ESPN "reassignments" that have minimized negative coverage

Ranking potential QB-needy NFL teams from most to least desirable

The 10 best club soccer teams of the decade

The Big Dance season is almost here, and huge basketball hoops are on their best feet forward, preparing...

Our society tends to place professional athletes on a pedestal. They’re famous, talented, and easy to root for...

Euro 2020 takes place across 12 cities in as many UEFA countries this summer, in a unique format...

With or without Tom Brady, the New England Patriots will always command respect – not to mention a...