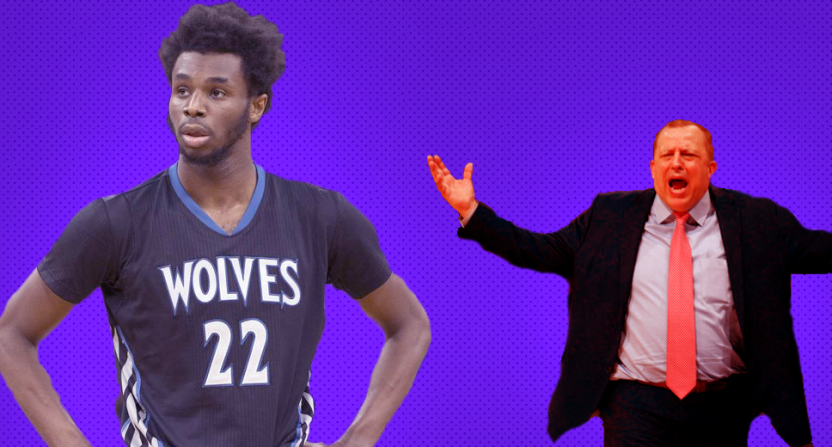 Tom Thibodeau is a good and respected NBA coach. It’s why the Minnesota Timberwolves payed $40 million to hire him back in 2016 and gave him full roster control. Mired in decades of losing, the team needed stability and Thibs looked to be the man to provide it. However, after a couple seasons it’s clear, giving him power in the front office backfired as the Timberwolves – despite a plethora of talent – are stuck in the mud and won’t take the next step until Thibodeau relents some power or find a new coach altogether.

Here are three reasons why the Timberwolves are stuck under Thibs.

Minnesota would be in a much better position if Thibodeau, President of Basketball Operations along with his coaching duties, relented roster control because his decision making has brutal.

Thibodeau inherited a roster featuring three legit young stars, two of which – wing Andrew Wiggins and forward Karl Anthony Towns – are still on the roster. You’d think he’d have a wicked core around them after two seasons. Instead, Thibodeau failed to surround them with the necessary talent in order to succeed.

Acquiring former Bulls Jimmy Butler, Taj Gibson and signing Jeff Teague (an overpay at $57 million over three years) were savvy moves, however, almost everything else has been a disaster.

Thibodeau was responsible for handing $22 million to backup center Cole Aldrich and got under 600 minutes over two seasons before waiving him this Summer. Meanwhile, he refuses to give minutes to talented youngster point guard Tyus Jones, instead, opting to bring in a washed-up Bulls’ favorite Derrick Rose (and re-signing him). In another questionable move, Thibs signed center Gorgui Dieng to a four-year, $64 million extension and proceeded to play him 16.9 minutes per game.

This offseason one of Thibodeau’s only roster moves shows why he shouldn’t be running the show. Thibs withdrew a qualifying offer to the team’s best shooting big Nemanja Bjelica worth $4.9 million and used the money to sign 33-year-old forward Anthony Toliver to a one-year, $5 million deal. He managed to needlessly replace Bjelica with an older, more expensive and less versatile player and inadvertently hard-capped the team.

Room mid-level deal of $4.4M, sources say. Minnesota opting against this level of deal for Bjelica to pay Tolliver more — and hard-cap themselves in the process — is, umm, interesting (and I like Tolliver a lot). https://t.co/5iZPACKliy

In the draft, there’s not much to add.

Point guard Kris Dunn and the team’s seventh pick (forward Lauri Markkanen) were traded to Chicago in the Butler deal and his 2017 pick (from the Bulls) Justin Patton missed the half the season with an injury and spent the other half in the G-League. In 2018, Thibs took guard Josh Okogie 20th overall, despite the Georgia Tech guard projecting to go late in the first or in the second round.

Thibs hasn’t developed any prospects through the draft and traded away picks in favor of bringing in veterans. Strategically, it makes sense considering the Timberwolves exciting young talent. However, Thibodeau doesn’t have much to show for his roster moves except an early exit from the playoffs. Minnesota should give him the Doc Rivers treatment quick and let him focus solely on coaching because the ship is starting to sink.

It’s expected of Thibodeau-coached teams to see minutes per game numbers at an alarming number. The philosophy didn’t change in Minnesota, as T-Wolves starters had five of the top 42 players in minutes per game, including Jimmy Butler tied for second at 36.7 minutes per and Andrew Wiggins at 36.3 per.

It might seem fine now, but fans of the team should be worried he’s going to run his players into the ground. When he left Chicago, Thibodeau left with numerous broken players from too many minutes, including Joakim Noah and Rose. You don’t want to get to that point in Minnesota.

Thibodeau has enough talent on his roster to spread out his minutes and extend deeper into the bench, but, he completely fails to use them. If his minutes usage continues as is, the mileage on Towns and Wiggins will start to show.

If that wasn’t enough, the Timberwolves don’t appear to get along.

According to the Chicago Sun-Times, Butler has feuded with Karl-Anthony Towns and is “fed up with the nonchalant attitude of his young teammates.” His frustration is so bad, the Sun-Times reports Butler has “no intentions of signing an extension with Minnesota.” Yikes.

Butler leaving after next season would be a massive blow to Thibodeau and the Timberwolves. Butler should be leading the squad and help with the development of Anthony-Towns and Wiggins, instead, he’s left frustrated by their lack of taking the next step and wants out. Woof.

Thibodeau belongs behind an NBA bench. But, he shouldn’t be making roster decisions. It’s a tough ask, but he needs to relax, trust his players more, play his stars less and focus on the long-term instead of the immediate. Otherwise, he’ll depart with the same reputation he had in Chicago: A hard-head who’s unwilling to adapt.

What are the top 5 potential NFL head-coaching job openings?

What were the five best documentaries of 2022?

12-year-old running back goes viral, does not look 12