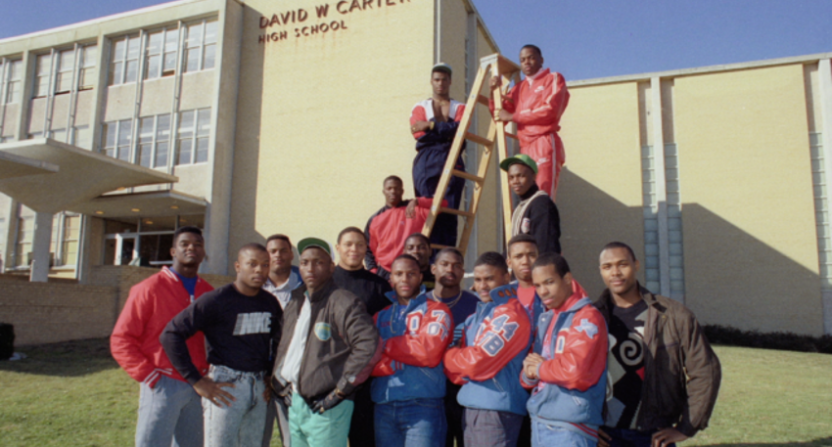 The next 30 for 30 will cover one of the most famous high school football seasons ever, but from the other side. The Permian Panthers (from Odessa, Texas)’ 1988 season was immortalized in Buzz Bissinger’s book Friday Night Lights: A Town, a Team, and a Dream, which went on to become a 2004 movie and then spawn the (fictionalized) TV series of the same name, which ran from 2006-2011.

That season ended with a controversial semifinal loss to Dallas Carter (Dallas’ David W. Carter High School), a team that went on to win the championship but was later stripped of it amidst a grade-fixing controversy and a robbery committed by several players. Now, ESPN will be looking at their side of the story in more detail with new 30 for 30 What Carter Lost, which is set to air August 24 following a Little League World Series game.

Here’s more from ESPN’s release on what to expect, as well as the trailer below:

With 21 players who were offered college scholarships and several who went on to the NFL, Carter took on the best that Texas had to offer, including the Odessa Permian team that inspired Friday Night Lights, as well as the worst: in a racially charged state-wide dispute over one player’s algebra grade and Carter’s legitimacy. Somehow, the team won the championship that year. Yet not too long after, the legacy they worked so hard for was thrown away after a group of players made a terrible decision. With personal interviews with players, coaches and family members, as well as glimpses of their lives today, “What Carter Lost” is ultimately about what Carter found.

“The movie Friday Night Lights showed the world a skewed and fictionalized version of one of the best high school football teams in Texas history, the 1988 Dallas Carter Cowboys, but very few of the players, coaches, parents, and teachers involved in that controversial season ever had a chance to speak for themselves,” said director Adam Hootnick. “In ‘What Carter Lost,’ I was honored to help bring the Carter saga to life in the words of the people who lived it, even as I struggled to make sense of everything that had happened. Nearly three decades on, there still aren’t any simple answers, but I hope everyone who encounters these unforgettable people and events will walk away asking hard questions about what it means to be a teammate or a leader.”

What actually happened in 1988? Well, there was a long court case over the algebra grade of a key Dallas Carter player, receiver Gary Edwards, with the University Interscholastic League and the Texas Education Agency trying to remove Carter from the playoffs and the Dallas Independent School District fighting that. Carter was allowed to play, and they beat Permian 14-9 in that semifinal.

Carter then beat Converse Judson 31-14 to win the state title. However, Edwards and other teammates were arrested for armed robbery in Dallas in May 1989, then later found to be part of 21 different armed robberies, and Edwards was sentenced to 16 years in prison. The court battle over Edwards’ algebra grade continued, and the school was eventually stripped of the title for using an ineligible player; the title was later awarded to Judson.

Interestingly enough, there was a 2015 movie about their 1988 team, Carter High, which prompted a lawsuit from Edwards. That whole movie is on YouTube:

The Carter team’s story is also explored in detail in this 2015 Dallas Morning News piece. So there’s lots of information out there about them, but it’s a story that isn’t necessarily known on the national level, unlike their Friday Night Lights opponents. And that could make for quite an interesting 30 for 30. Hootnick has a solid sports background, too, previously directing the 30 for 30 short Judging Jewell (about the security guard initially accused of the bombing at the 1996 Atlanta Olympics), as well as Son of the Congo (on Serge Ibaka) and Destination: Team USA.

We’ll see how this one turns out, and if there’s enough national interest in it, but it certainly sounds promising.

Andrew Bucholtz is a staff writer for Awful Announcing and The Comeback. He previously worked at Yahoo! Sports Canada and Black Press.

The highlights and lowlights of the 2020 NFL regular season

Why we needed sports in 2020 more than ever